Tony O’ Malley is an important and distinguished Irish painter of the twentieth century, he was born in Callan, Co. Kilkenny in 1913. O’ Malley is a self-taught painter who also worked as a bank official until he became very ill with tuberculosis in the 1940’s. Whilst convalescing he began to paint and in 1951 he began to exhibit his paintings.

View ‘Summer Painting’ within the Collection 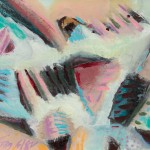 Mood, Atmosphere and Movements of the Irish Countryside

Nature and history are recurrent themes within his works and for over 40 years he captured through abstraction the mood, atmosphere and movements of the Irish countryside and also the landscapes of more exotic islands that he used to frequent. O’ Malley was strongly influenced by the artistic community at St. Ives where he holidayed in 1955 and settled there in 1960. Although these British abstract painters influenced him, he kept his own unique style and vision.

“Not so much abstract as essence. I could not paint for the sake of the pigment of whatever, but I like abstract form in the painting which instills it with meaning and power. Abstraction does enable you to get under the surface, to get beyond appearance, and to express the mind. But abstraction for its own sake does not interest me.”- Tony O’ Malley

In 1973 he married Jane Harris and in 1990 they moved back to Ireland where he was elected Saoi of Aosdana. Tony O’ Malley is now recognized as one of the leading Irish painters of his time and in 1999 he was the recipient of the Glen Dimplex Award for Sustained Contribution to the Visual Arts in Ireland. He died in 2003 and in 2005 The Irish Museum of Modern Art hosted a major retrospective of his work.