Paul Doran was born in Gorey, Co. Wexford in 1972 and he studied a Masters in Fine Art at the National College of Art and Design in 2001. Doran is one of Irelands finest painters and he celebrates the medium of paint itself. Working with abstract compositions of thick, layered paint, he creates highly textured works of a compelling nature. In his paintings Doran wishes to emphasize the handmade element; whereby organic structures can be assembled together by the human hand in a multitude of ways resulting in something that  appears complete but reveals itself to be fluid. The lack of something stable and ‘absolute’ makes Doran’s paintings an unmistakable contemporary experience. [1] 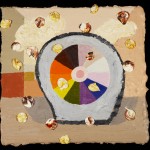 Emphasis on The Handmade

“For me, practical and conceptual concerns are inseparable. We live in a world that is more easily defined by technology, but I am interested in ideas about the handmade, how human existence can be communicated through the handmade in a more meaningful way. There is a real difference between process paintings and paintings that emphasize the presence of the human hand. For me, the latter is a more conceptual approach. I think that ideas about the handmade have an important role to play in a contemporary context” – Paul Doran