Exhibited Alongside Picasso and Braque

Mary Swanzy was born in Dublin in 1882 to a vey prosperous family, her father being Sir Henry Rosborough Swanzy, this allowed her access to an education in Arts that surpassed the average artist at the time. She attended art school in Dublin and in 1905 she moved to Paris and exhibited occasionally alongside artists such as Picasso and Braque. 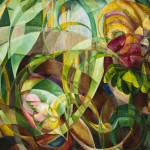 One of the First Artists to Bring Cubism to Ireland

After Paris she returned to Dublin and was one of the first artists to bring Cubism to Ireland. She was also one of the most talented women working in Ireland at the time; others included Mainie Jellett and Evie Hone. Unlike Jellett and Hone who remained devoted to a national Irish art, Swanzy pursued her own artistic endeavors being influenced not just by Cubism but by Futurism and Vorticism also. She was a dedicated Modernist repeatedly using swirling patterns and rich colours capturing landscapes, lush vegetation and flowers in her paintings.

Mary Swanzy lived the latter part of her life in London and continued to paint up to her death at age 96. Ten years before she died, Swanzy was honored with a retrospective exhibition at the Municipal Gallery of Modern Art in Dublin.