Sonja Landweer was born in Amsterdam in 1933 and studied ceramics at the Amsterdam School of Industrial Design. In 1965 she was invited to teach at the Kilkenny Design Workshop where she was artist in residence and she currently lives and works in Co. Kilkenny. Landweer is distinguished internationally for her jewellery, ceramics and bronze works.

View “Relationships” within the Collection 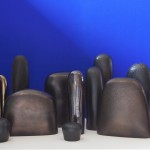 Works are Inspired by Nature

As an internationally acclaimed artist Landweer exhibits great skill, versatility and talent. Predominantly her work is inspired by textures, forms and colours found within the natural world, these influences can be seen throughout her practice, from her organic seed and plant forms to her circular vessels.

Her artistic career has developed and spread into other genres such as drawing, painting, printmaking and contemporary jewellery. In 1981 Landweer became a member of Aosdana and continues to exhibit regularly both nationally and internationally.