Martin Gale was born in Worcester in 1949 and moved to Ireland at a very early age. He was educated in Ireland and graduated from the National College of Art and Design in 1973. In 1975, Gale held his first solo-exhibition in the Neptune Gallery in Dublin, and in 1980, he moved to the Taylor Galleries where he has had regular solo shows ever since.

Gale’s practice responds to the contemporary Irish landscape and how people fit within it. Painting in both oils and watercolour he creates a dark commentary on rural life in modern Ireland. His painting style is influenced by twentieth century realism and 1970’s photorealism. The displacement and isolation of the figures he paints within the landscape effectively captures the anxiety surrounding identity and place felt by contemporary Ireland.

View “Cooling Down” within the collection

Cooling Down by Martin Gale

View “Brother” within the Collection 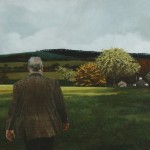 Invites us to Look Twice

“Not that he is painting Eden. The overall vision is far from pastoral, if there is pasture, it is for grazing. There is nothing prelapsarian about his furrowed fields and tyre-marked headrigs, his pick-up truck parked in the cart road, his glimpse of a flyover at the horizon or a digger with its jaw dropped, facing a pile of screenings. At the same time, the pictures don’t have designs upon us. They register injuries to the land and incursions upon it, but they don’t insist on these matters as ‘issues’: his paintings are ‘green’ right enough, but in an older, grateful, grass green sort of way. They say- or rather they silence us to the point where we think- ‘Still and all’. They invite us to look twice, then to stand still looking until we begin to wonder if there is such a thing as innocent bystanding. They hold in a single, steady, local focus the reality and anxiety of the times.” – Seamus Heaney

In 2004, gale was the subject of a major retrospective, held first in the RHA Gallagher Gallery, and subsequently in the Ulster Museum in Belfast in 2005. This was under the auspices of the Nissan Art Project, which took a concentrated review of his work over the previous decade, with a coda added of paintings from the late seventies through the eighties.

Gale has exhibited widely in Ireland, England, Europe and the USA. His work can be found in many public, corporate and private collections. He has been a full member of the Royal Hibernian Academy since 1996, where he is presently the Keeper, and a member of Aosdana since its inception.