Born in Haifa (of Armenian extraction) Sophie Aghajanian  was educated in Cyprus until she  moved to London in 1962 to study painting at Ravensbourne College of Art & Design followed by a post graduate year in printmaking at Brighton College of Art from 1966 – 1967. She moved to Belfast in 1977 where she still lives and works.

View “Dark Projection” within the collection 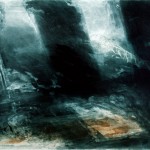 Tension Between Light and Dark

As well as being a painter I am a  printmaker, and work mainly with intaglio, drawing directly with the acid onto the copper plate which gives me a more painterly result and allows me to work in a completely different way as the end result can never be predicted as in a painting. I like the fact that the accidents happen in the process that can sometimes contribute to the image in a way that I had not anticipated. It allows for tension as in the etching in this collection, “Dark Projection” – Sophie Aghajanian

Marie Heany in writing about Aghajanian’s work states: “This artist suggests rather than states, preferring lateral vision to the direct gaze….the tension between light and dark has been a constant in Sophie Aghajanian’s work from the beginning. She’s fascinated by light and its ramifying effects….she talks with equal enthusiasm about the importance of shadows and how she finds them almost more alive than the actual objects. In her work the relationship between light and dark is ambiguous, the balance between them delicately poised and dangerous.”

Other selected group exhibitions include:

Commissions include the National Self-Portrait Collection of Ireland. Invited contributor to the “Great Book of Ireland”. Invited artist for the “Holy Show”  and “Garden of Earthly Delights” exhibitions, both curated jointly by the Chester Beatty Library, Dublin and the Graphic Studio Gallery, Dublin in 2002 and 2005.

Her work is included in many public collections in Ireland and abroad including: