Irish artist Serena Caulfield is currently based in Co. Wexford, in 2008 she received a BA(Hons) in Art from the Wexford Campus of Art and Design, Wexford. She then studied at the Norwich University College of The Arts, UK, where she was awarded Masters In Fine Art with distinction. Caulfield now manages the Sweet Shop Gallery in Rosslare Co. Wexford, which functions as a sweet shop, art gallery and a studio space.

Primarily Caulfield is a landscape painter and seeks to utilize her surroundingsin order to consideraspects of the human condition. Her paintings transpire frommerging knowledge and life experience withthe landscape viathe process of mark making, layeringand sapient use of colour. By reiterating certain aspects of the landscape Caulfield’s work culminates intoa series of semi abstract renditions emerging from a boundless expanse.

Caulfield engages her art practice with literary theories and psychoanalysis, through abstraction she questions perceptions of reality and it representation. She draws upon the art historical, exploring and reflecting upon the works of artists that have gone before her.

See A Great day for Freedom in the County Collection 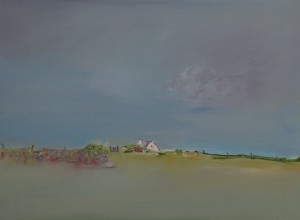 Ability To Render The Aesthetic

“I, as artist, am the signifier, and according to Bourriaud, (2002) a ‘semionaut’, inventing trajectories between signs. Although not always being able to articulate those signs and arguments in words, I have the ability to render them aesthetic. It is my creation, my work, and is never far removed from me, as the artist. My work is largely about the mediation between the real and its representation, and coincides with the invention of a process of presentation. The image is the act of presentation. Further re-presentation emerges in the space that it resides in. Each facet is critically opposed to its representation, allowing a dialogue to form between multiple aspects. For this reason, my stance, on critical terms, largely resides in the process and the act of making and presenting the work, an act in which I am firmly embedded.” –Serena Caulfield

“The knowledge of her locality is expressed in the various changing aspects of the sea, sky, and other physical objects she encounters while exploring this environment. The blocks of blue tones interspersed with the colourful brush marks are vaguely representational of that physical intrusion into Nature. While a majority of her work shows vast amounts of sky amongst the physical objects of the environment…” – Susan Edwards, The Root of an Unfocus Review, September 2014