Sandra Bell was born in 1954. She was educated in Newry, Dundalk and at Glengara Park, Co. Dublin. She is a self-taught sculptor predominantly working with  the “Lost Wax Method” for bronze casting. 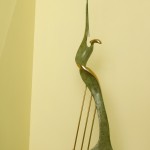 Sandra Bell’s practice focuses on  moulding and developing an array of simple linear patterns and flowing shapes, all of which depend upon abstracting the human figure. Executed with high technical skill and craftmanship, superbly finished with rich and varied patinations and polished surfaces, they invite active participation. Her sculptures are elegant, graceful and feminine and  are influenced by many styles, such as Celtic, Classical and African, resulting in a unique and recognizable practice.

“I predominately work in two areas, each complimenting the other, Gallery Exhibitions and Public/Private commissions.Gallery Exhibitions allow me freedom of expression and also offer me the opportunity to exhibit the maquettes of the monumental works I produce. Monumental commissions channel my work into particular directions, depending on the brief and the suggestions of clients. I find the interaction with commissioners of great benefit when creating site-specific work. It also makes the sculpture more personal for those who choose to live with it.My aim as an artist is to portray the essence.” – Sandra Bell

Andrew Wyeth once said: “To my mind the master is the one who can simultaneously give the effect of simplicity and restraint, yet you can go right up to it and explore it endlessly with greatest joy”. This is exemplified in the work of Sandra Bell – there is rhythm and movement, whilst the pieces exude a wonderful calm and quietness.