Robert Armstrong is a contemporary painter who was born in Gorey, Co. Wexford in 1953. He currently lives and works in Dublin and is represented by the Kevin Kavanagh Gallery. Outside of his painting practice he is one of the founding members of Temple Bar Gallery and Studios and is Head of Painting at The National College of Art and Design since 2002. 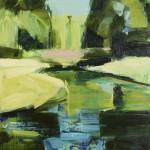 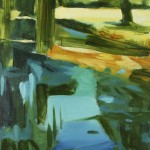 The Blues by Robert Armstrong

Engagement with the Painted Surface

Robert Armstrong’s work from the 70’s until the late 90’s addresses landscape in a painting language, which explores painting after Modernism. The landscape of Wexford and Wicklow was a starting point. A series of works from the mid 90’s used the frozen surface of the pond of the Botanical Gardens as a metaphor for an exploration of the possibilities of ‘surface’ in painting and used photographs as sources. Later paintings refer to the volcanic landscape of the Aeolian Islands in the Mediterranean. The shimmering, sulphurous heat of that landscape resulted in paintings which used a different colour register and were further abstracted by often being based on individual frames from video footage. Currently Armstrong’s practice concentrates on generating new meanings and narratives for Renaissance paintings by bringing insignificant background details to the forefront  in order for a contemporary society to appreciate.

“Over the past few years, Armstrong’s ever complex engagements with the painted surface have been expanded into more broad-based interrogations of the meaning of surfaces, contemplating the appearances of things in a manner not unrelated to Clark’s wish to address ‘all that is hidden and travesied’ in the dominant visual regimes of contemporary culture.” – Declan Long, from the book published on the occasion of Robert Armstrong’s exhibition at Kevin Kavanagh Gallery 2007.

Studied at National College of Art and Design, Dublin