Peter Killeen was born in Dublin in 1977, and began working for the highly regarded Cast Bronze Foundry in 1996. It was here that Peter was first introduced to the Cire Perdue (lost wax) method of bronze casting, and subsequently began casting his own work. In 2003, he travelled to Australia to work with the Australian Bronze Sculpture House in Sydney. During his three years in Sydney, he became head bronze caster.

After years of working alongside some of Ireland’s leading Sculptors, Peter now works part-time with Cast, while also creating his own pieces. He continues to be hands on at every stage of the process, and his careful attention to detail at each stage has been informed by his foundry background.

View “Goldfish” piece within the collection 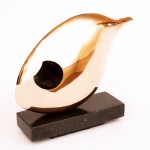 Peter’s works are inspired by the beauty and simplicity he finds in the materials in front of him and observe a constant theme of Irish nature and wildlife. They have been exhibited at the RHA, Oireachtas, The Wexford Opera Festival and Sculpture in Context.