Studied at NCAD & The Gorey School of Art

Patricia was born in Kashmir in 1943, and as her father was Irish the family returned to co. Wexford in 1950 to a farming life. She studied fine art in NCAD in the evenings and also under various tutors in the Gorey School of Art (director Eamonn Carter).She achieved distinctions in art history, fine art, drawing and painting.

Patricia has exhibited regularly in Wexford, Gorey, Carlow and Dublin. She has had her work sold at Eigse, Newtownbarry House Gallery, The Norman  Gallery, Greenacres, Wexford VEC and other festival art venues. She has entered various competitions winning the mature student award at the Oireachtais. She mostly works in oil but enjoys water colours,pastels or pencil for sketching in the field. The sensitivity of painting often mundane still life or moody organic subjects is of great interest to her as is the more traditional scenic and exciting works of land and seascapes,as she has a great fascination with water and light.

View ‘Pool’ within the Collection 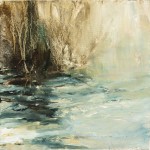