Paddy Lennon was born in Inchicore, Ireland, in 1955. He studied in London at the City and Guilds Art School and graduated with a diploma in 1980. During this early period his style was academic, based mostly in nudes and anatomy. Now, Lennon’s work has evolved covering many subjects and mainly focuses on abstraction. His most recent works are based upon his fascination with the equine form, creating highly detailed and skilled representations of these beautiful animals.

View ‘South Slobs’ within the Collection 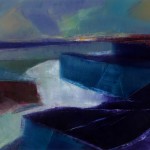 “Paddy Lennon’s paintings are very much about sensation, atmosphere and the effects of light within the landscape. His take on these subjects though is far from explicit, as his abstractions leave just traces of the sky and aquatic settings which offered the original inspiration” – Mark Ewart

“When I paint, what interests me in the work is its underlying abstraction. This is what generates its quality, its life and its innate truth. If the work can arouse sensations, thoughts, ideas and feelings, and stimulate the viewer then for me it is successful”- Paddy Lennon