Studied at Bolton College of Art

He was elected an Associate of the Royal Ulster Academy of Art in 1975 and in 1977 he became a full Academician. Recently Shawcross was appointed Member of the Order of the British Empire (MBE) in the 2014 New Year Honours for services to the arts in Northern Ireland.

View ‘Portrait of Colm Brennan’ within the Collection 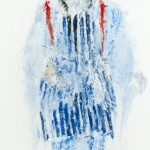 Shawcross is a renowned colourist and technical innovator who has gained inspiration from French artists such as Matisse, Cezanne and Bonnard. Portraiture and still life dominate his practice and his approach to painting is simplistic and almost childlike resulting in some of the most original and exciting artworks being produced in Ireland today. Keeping his brush strokes to a minimum he captures the essence, movements and gestures of his sitters.

He has held one-man shows in Dublin, Belfast, London and Manchester, and internationally in the United States and Hong Kong, his artworks are housed within many public and private collections.