Studied at Limerick School of Art

Mike Fitzharris was born in Limerick in 1952. He studied at the Limerick School of Art and graduated in 1973. He then undertook post-graduate studies at the Hochschule für Bilden Kunst in Berlin from 1973 until 1976. On his return to Ireland he taught art in both Kerry and Dublin but now paints full time. He now lives and works in Dublin and in Marbella, Spain.

View “Low Tide” within the collection 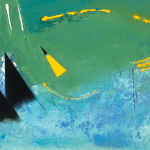 Fitzharris is a contemporary painter specializing in abstract landscapes. Painting landscapes from an aerial point of view, his palette of contrasting colours emphasizes his love of Spanish and Irish culture.

“There are many happy accidents in my work. Accidents help stimulate new things in the painting that I can latch onto and use to complete the picture. I have a very good idea about what I’m going to do before I start but I’m open to things happening that weren’t planned and that means every painting is interesting to me without exception.”- Mike Fitzharris

“His work is grounded in landscape. The pictorial perspective is invariably aerial which creates a tunnel view that the audience enters into visually. Paint is usually scratched into the surface and lines and shapes swirl as if controlled by natural forces. The colour is often Mediterranean in hue and he favours rich yellows, orange, vibrant greens and blues. Occasionally industrial or sensitive environmental circumstances are chosen as subject matter”. – Samuel Walsh

Mike has also represented Ireland in exhibitions in Canada, France, Slovenia, Wales, Belgium, Northern Ireland and England. He has received many national awards and grants, including the Taylor De Vere Award at the RHA in 1990, the Arts Council Award in 1996, Eigse’s Open Exhibition Award in 1997/2003, Royal Ulster Academy Award in 1999. His work can be found in many national collections including AIB Gropu, OPW, Boyle Civic Collection, and Dublin Port and Docks Authority.