Michael Canning was born in Limerick in 1971 and he studied sculpture at the Limerick Scholl of Art & Design and the School of Fine Arts, Athens. He received his Masters Degree from the National College of Art and Design, Dublin in 1999.Canning is a contemporary painter whose works seem to conjure references to Renaissance/traditional paintings as well as botanical illustration. Building up his paintings in layers, using oil paint and wax as well as ground earth, ash or soot he creates an atmospheric and melancholic tone.

View “The May’ within the Collection 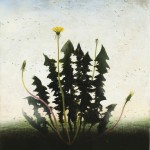 The May by Michael Canning

“My practice is as concerned with the manipulation of materials in order to question memory and experience as it is with addressing representation, classification, order, disorder, landscape and northern European painting heritage. I am interested in the transformative processes in the making of the work. Every action that contributes to the end image is loaded and part of a process of unearthing meaning from memory.[….] I find these plants on daily walks near my home in County Limerick. The names of the plants are not important to me. Many of them I know by local names. Some of them are known to be poisons or remedies. Others have had traditional uses as fabric dyes or colourings. I often find plants I do not recall having seen before. When I’m out I’m not always looking for revelations, apparitions. I’m just looking for that which I feel I should have seen before, but never did.” – Michael Canning

Art of the State, Office of Public Works, Touring Exhibition,2004