Maurice Cockrill was born in Durham, England in 1935. He studied at the Wrexham Art School and University of Reading between 1960 sand 1964. He lectured at the Liverpool College of Art and the Liverpool Polytechnic from 1967 to 1980. During the years 1985 to 1988 Cockrill was a visiting lecturer at the Royal College of Art and the Central School of Art. He was also a part-time lecturer at the Saint Martins School of Art.

Cockrill’s practice evolved over his lifetime from landscape and figurative painting to complete abstraction, thus proving hard to categorise his artwork.

Although his work is difficult to define within any one movement by observing his practice overall a progression emerges and a deep understanding of art history comes to the fore.

Cockrill studied the works of the old masters, the modernist painters and his contemporaries all of which is revealed through his meditations in paint.  His earliest paintings involve the techniques of Pop Art and Photorealism. He then embarked on a series of figurative work during the 1980’s that leaned towards a more expressionistic style. In the 1990’s Cockrill revealed a renewed interest in landscape painting and investigated the styles of the English Neo-Romantics.

From the mid 1990’s his work became more abstract, he sought to express the emotional connections to landscape and memory resulting in conceptualised renditions of his homeland.  From these works Cockrill developed a personal symbology that drove his practice into pure abstraction. Throughout his career Cockrill was preoccupied with organic forms, in particular water and rivers.

Ash in the Collection 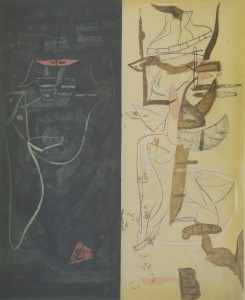 His Imagination is Mercurial

‘the artists I’ve admired most, like Picasso, are the protean ones. I’d rather be changing shape than just be doing the same thing time after time.’ – Maurice Cockrill

“His imagination is mercurial; his creative methodologies are resourcefully

experimental; his invention is diverse and virtuosic. Each new phase of his painting presents us with yet another high definition performance, something not anticipated, as if he was incapable of repeating the previous act, and felt impelled every time to respond to Diaghilev’s imperious injunction: ‘Étonne-moi!” – Mel Gooding

Cockrill’s first solo exhibition was held in 1984 at the Edward Totah Gallery in London. The first retrospective of his work took place at the Walker Art Gallery, Liverpool in 1995 and a further retrospective was held at the Royal West of England Academy in 1998. Cockrill’s work has also been included in many group exhibitions throughout Europe and in Australia.