Mary O’Connor is a visual artist and printmaker.  She was born in Wexford and studied visual communication and 3D design at DIT in Dublin, and painting at Chelsea College of Art, London, and in New Zealand. She has also lived in Belize and Kazakhstan, a place of vast landscapes and infinite white winters; during her time there she published two books of photojournalism on central Asia.

View ‘Hills Filled with Autumn Berries’ within the Collection 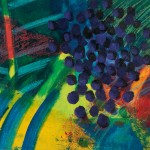 Mary’s paintings and prints are influenced by her surrounding, the vast landscapes encountered on her travels are conveyed through shapes, space and colours that emerge as non-representational abstract compositions. Cultures, travel, time, memory and flux are essential elements in her work.

Mary is represented by the following galleries: