A Fulltime Painter and Printmaker

Marja van Kampen was born in The Netherlands. She is a full-time painter and printmaker, receiving her degrees for Painting, Printmaking and Art History from the Akademie voor Beeldende Kunsten in Arnhem, The Netherlands, in 1972. Having practiced her art there for a number of years Marja travelled through Europe and settled for a while in the South of France before moving to Ireland permanently in 1982. 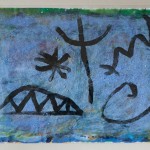 She is a co-founder of Artspace Studios, Galway and was a driving force in its development, before setting up her own studio. Her work has appeared in numerous group exhibitions in Ireland, Europe, USA and as far as China. Recently she exhibited at the Affordable Art Fair, London. Solo shows include a National Touring Exhibition, Galway Arts Festival, Worpswede, Germany, Norman Villa Gallery, Galway, Tulca Visual Arts Festival, Galway, The Kenny Art Gallery, Galway.

Her work is in many public collections including The Arts Council of Ireland, The Department of the Taoiseach, Office of Public Works, Microsoft Irish Art Collection. Some of her very large paintings are in the Radisson SAS Hotel Collection and the University College Hospital Galway Collection.

She is the recipient of several Awards, the most recent a Travel Award from the Arts Council to study American expressionistic painters in New York.