Meanings can be Altered by Action

John Cullen is an artist based in Co.Wexford. He qualified with a degree in Fine Art from NCAD in 1988. Since then he has been practicing as a painter and photographer. He has been involved in community based art projects, has worked on commissions and has been involved in curating painting exhibitions. His practice focuses on creating images that attempt to transform the ordinary in an effort to question the meanings that we perceive as given or normal. Meaning is fluid and can change in time and place. Objects convey meanings which can be easily read on one level but can also contain hidden meanings and these meanings can be altered by an action, by time or an event. The work evolves from within this labyrinth of references and layers of signifiers.

View ‘Light NO. 5’ within the Collection 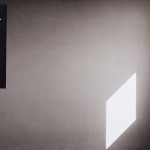 Light No. 5 by John Cullen

“This photograph is part of a series that evolved when I was doing a project on public funded buildings under construction. A building under construction is in a state of flux and its appearance is changing daily. The construction process and its varied activities throw up all kinds of unintended visual images. Concentrating on images left by tradesmen on walls, floors and ceilings I noticed how these random images had an integrity and visual wholeness that allowed them to exist almost as works in their own right, at some remove from their original intended use.

For example in terms of their inherent visual properties – line, colour, shape, pattern and texture, they contained the essences of modernist abstract painting.

In Light #5 shape and time are the dominant themes. There are two main shapes in the image – a rectangle formed by a window opening and a diamond shape of reflected sunlight. There is a contrast between the solid permanent shape of the window and the fleeting, momentary shape formed by sunlight. The somewhat pleasing spatial relationship and alignment between the two shapes only lasted for a brief period of time. This fleeting, temporal happening has resonances in relation to how photography captures the essence of an event in an instance – the decisive moment as coined by Henri Cartier-Bresson. On a human scale this notion of brevity somehow also reflects on the passing temporal nature of our own existence.” – John Cullen