View Red Bonnet in the Collection 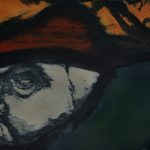 Hughie O’Donoghue was born in Manchester, England, although many of his early summers were spent in Bangor Erris, North-west Mayo, from where his mother had reluctantly emigrated in 1937. The stark Irish scenery with its accompanying sense of tragedy, derived from the days of The Great Famine, found later expression in O’Donoghue’s art.

O’Donoghue became a dedicated student of art, studying drawing and painting at Goldsmiths’ College, University of London, and since then has been exhibiting his work in a variety of international solo and group exhibitions, gradually evolving a style of art all of his own. His painterly skills, together with his research into his subjects, has enabled him to produce a highly acclaimed body of work, several prestigious awards (including an honorary doctorate from University College Cork) and a distinguished reputation, not least for his masterful expression of human suffering. He has exhibited widely in the UK, Spain, Italy, Germany, France, Holland, Australia, and the USA.

Hughie was elected as a member of the Royal Academy in 2009.

Hughie is considered one of the leading painters of his generation, he was recently selected to design windows for the Henry V11, Lady Chapel, at Westminster Abbey.