Born in Wicklow in 1917 George Campbell is one of Ireland’s foremost landscape artists and still life painters. Campbells’s artistic practice included landscapes, still-life and figure painting. He painted in watercolours, oils and mixed media, and produced a number of etchings and crayon drawings. He also undertook several commissions in stained glass.

View “Azteciana” within the Collection 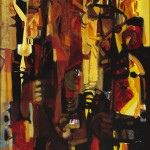 Appointed Associate of the RHA

He first exhibited at the Mol Gallery, Belfast in 1944, alongside Gerard Dillon, with whom he shared painting trips to Connemara. He first showed at the Royal Hibernian Academy (RHA) in 1948, in the company of Dillon and Daniel O’ Neill and he continued to exhibit at the RHA over the next 30 years.

In 1951, George Campbell made his first visit to Spain, a country that so captivated him, he returned there to paint nearly every successive year. This Spanish influence appears in his work in the form of bullfighters, gypsies, street scenes and musicians. He exhibited several times in Madrid, even learned to play the guitar, and was honoured as a Knight Commander of Spain in 1977. The influence of Cubism can also be seen within many of Campbell’s paintings and the work Azteciana within the Collection is a good example of this.

Campbell’s work appeared in many exhibitions during his lifetime including Waddington Galleries in Dublin, Ritchie Hendricks Gallery, Dublin, the Tom Caldwell Gallery and the Water Colour Society of Ireland.Campbell was appointed an associate of the Royal Hibernian Academy (RHA) in 1954 and became a full member in 1964. The Water Colour Society of Ireland elected him as a member in 1954 and both the BBC and RTE screened profiles of Campbell in the !970’s. His paintings are held in most major public and private collections, Campbell died in 1979.