One of Ireland’s Most Recognized Artists

Eithne Jordan was born in Dublin in 1954 and she studied at Dun Laoghaire School of Art. Being one of Ireland’s most recognized artists she is famous for her depictions of urban spaces, in particular areas that go unnoticed such as factory roofs, car parks, subway tunnels and housing estates. These environments are skillfully drafted to instill a sense of emptiness, void of a human figure, all exaggerated with her use of colour and tone.

View ‘House with Fences’ within the Collection 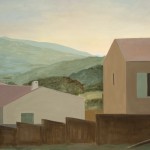 Houses with Fences by Eithne Jordan