Founding Member of the Gorey School of Art

View “Mijas” within the Collection 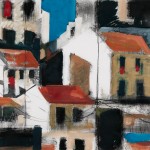 Since 1984 he has contributed to exhibitions in the RHA as well as in several Dublin galleries. In February 2007 he was Artist in Residence at Cill Rialaig Co. Kerry. In May 2006 he held a solo exhibition at the Leinster Gallery entitled Prairie Series 2004-2006. He was a founding member of the Gorey Artists Foundation in 1999 and in 2002 was a founding member/director of the Gorey School of Art.

“The work is very much about my experiences growing up in Gorey. Community and family are recurrent themes. More recently I have been exploring issues of isolation and displacement. Taking the Native American experience with particular interest in the “Trail of Tears’ or the “ The Lonely March” from Mississippi to Oklahoma”.- Eamonn Carter