View The Theatre in the Collection 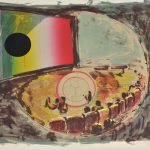 The Theatre by Diana Copperwhite

Copperwhite is engaged with a sustained conceptual exploration of memory and abstraction. Using identifiable subjects, and sometimes drawing on media images, she plays with light and colour to create slightly unreal dreamlike and transitory compositions. The mood of her work is generally lyrical, creating an air of ambiguity of memories transformed in the unceasing passage of time.  In a most unique capacity, she works over recognizable l images, working and reworking their surface and adding rich layers, so that objects are transported in an entirely new direction into a fluid visual quality of being remembered, actually reimagined in the most singular vibrant ways.

She has exhibited extensively in Ireland, including solo presentations of her work at Royal Hibernian Academy, Limerick City Art Gallery, West Cork Arts Centre, Highlanes Municipal Gallery, and Kevin Kavanagh Gallery.  Her overseas exhibitions include Purdy Hicks Gallery, London, and Centre Culturel Irlandais, Paris, France – in conjunction with the AIB Prize. In 2013 she started showing in New York and Miami with Thomas Jaeckel.

In 2012 she was a resident artist at the Josef Albers Foundation Connecticut, USA.  She was a finalist in the Guasch Coranty Fundacio Painting Prize, Centre Cultural Metropolita Tecia Sala, Barcelona (2008) and was winner of the AIB Art Prize (2007).  Her work is in public collections including: Irish Museum of Modern Art, Arts Council of Ireland, Limerick City Gallery of Art, Office of Public Works, Contemporary Irish Art Society, Mariehamn Stadbiblioteque, Aland, Finland. International Red Cross Netherlands, and private collections in the USA, Australia and Europe.