David Begley is an artist and writer born in Dublin 1972, he currently lives and works in County Wexford. He studied at NCAD and The West Wales School of The Arts. Begley’s drawings and paintings have been exhibited in America, Australia, Britain, France, China and he exhibits regularly in Ireland. His anthropomorphic landscapes and allegorical figurative works utilise classical and contemporary techniques whilst drawing upon invention as much as observation. 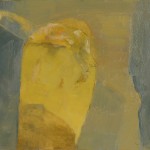 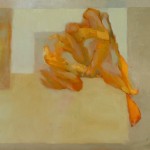 After Supper by David Begley

Drawing from the Human Figure

“Both works in this collection come from a body of work titled Limbo. The works begin as drawings from the human figure, concentrating often on detilas of joints and limbs. Collectively the paintings have a sense of stillness about them. With each new body of work my intention is to evolve my painting, this time my focus has been on the use of a limited palette.” – David Begley

“In Begley’s art we are immediately thrust into multiple worlds of the real and the imaginary rendered through a pallette […] to more sombre browns, grenns and blacks. These are paintings full of atmosphere and intrigue with vague outlines of dwellings, rocks, caves, ships and some allusive figures.” – Dr Brenda Moore-McCann: David Begley and The Poetics of Potential, 2012.

Begley has held many solo exhibitions in Ireland, his most recent: ‘Drawings and paintings’ at The Presentation Centre, Enniscorthy [2013] and ‘Amke Tiem’ at Olivier Cornet Gallery, Dublin [2012]. In 2002 he was commissioned to paint ‘The Resurrection’ for The Church of The Most Holy Trinity, Bunclody, County Wexford, Ireland. The commission was co-funded by The Arts Council of Ireland.

Recent group exhibitions include ‘Irish Wave’ a series of exhibitions in Beijing and Shanghai [2013] and Carlow Arts Festival Open Submission exhibition at Visual Centre for Contemporary Art [2013, 2012]. In 2012 he was awarded the Tyrone Guthrie Bursary Award by Wexford County Council and in 2011 and 2013 David was awarded residencies at Cill Rialaig, Co. Kerry.

His work can be found in the public collections of AXA Insurance Ireland, The Environmental Protection Agency, The Irish National Teachers Organisation, Office Of Public Works and Wexford County Council. He is a featured artist on The Drawing Suite. David will be working at a studio at The RHA, Dublin for three months from April 2014.

Above & Below, Cherrylane Fine Arts, Wicklow, 2008