Conor Fallon was born in Dublin in 1939 but soon after moved to Wexford where he grew up on the family farm. Fallon is a renowned Irish sculptor of the late 20th Century and he was initially known for his small sculptures of steel birds and animals, he later became noted for some fine large open-air pieces. Fallon’s works simplify the object capturing a beauty and elegance that is influenced by the Cubist movement.

View “Crow’ within the Collection 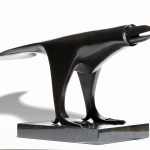 Initially Fallon was accepted into Trinity College to study natural science but he soon left Trinity to study fine art. In 1964 Fallon went to St. Ives to see the artist Tony O’ Malley, who was a family friend and a significant influence on Fallon’s artistic career. At this time Fallon was interested in painting but was never satisfied with the works he was producing. During his time at St. Ives he met the artist Nancy Wynne-Jones, they felt an instant connection and were married in 1966.

A revelation occurred in his career when he was introduced to the sculptors Denis Mitchell and Breon O’ Casey, he had finally found his niche. When Fallon created an Owl In Aluminum (1969) Mitchell advised him to specialize in Sculpture.

Fallon was awarded the Oireachtas (Parliament) Gold Medal for sculpture in 1980 and was made a full member of the Royal Hibernian Academy in 1989. His work is in many public collections in Ireland. Conor Fallon died in Co. Wicklow in 2007.