A Style That Evokes Lucian Freud

Colin Davidson is a contemporary artist living and working near Belfast, Northern Ireland. He began his artistic career as an urban landscape painter, but after the production of his critically acclaimed portrait of musician Duke Special, the focus quickly shifted to large-scale portraits. Some sitters are recognizable public figures and some are unknown. He paints his subjects from life in the traditional sense with a style that evokes Lucian Freud’s paintings. In terms of process these portrait paintings can be seen as a direct follow on from his urban landscape works because of their sheer scale and use of impasto, they have the ability to conjure up qualities of a landscape.

View “Seated Nude” within the Collection 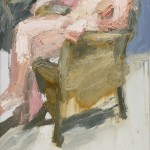 Captures the Spirit of the Sitters

“Davdison manages to catch the spirit of the sitters without destroying the very secret of their inner life by the large scale of his paintings. The lively portraits reveal the one moment fixed on the canvas as a continuing emotional experience, which the viewer is invited to share.” – Andrea Grunert :To catch the spirit of the sitter: Colin Davidson’s portraits at Belfast’s Lyric Theatre.

“… the excuse to put pigment on ground, to explore the endless magic of paint and line. The resulting works are, for me, a record of the interaction with paint and canvas- the struggle between intent and medium becomes an intrinsic part of the image. The process of this interaction, therefore, becomes the subject.”- Colin Davidson

Colin Davidson has exhibited extensively in London, New York, Milan and across Ireland. He has been shown regularly at the Royal Hibernian Academy Annual Exhibition, where he has twice won awards, and has been an Academician of the Royal Ulster Academy since 2006, having won the R.U.A. Gold Medal three times and the Silver Medal twice.