Resists The Tendency Towards Abstraction

Charles Brady was born in New York, America, in 1926. Following time spent in the US Navy aboard an aircraft carrier in the Pacific, he studied at the Art Students’ League and worked as a guard in the New York Metropolitan Museum. Brady moved to Waterford, Ireland in 1955 and then to Dublin, finally settling in Dun Laoghaire with his wife Eelagh in 1962.

View Pear within the Collection 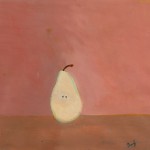 Brady resisted the tendency towards abstraction that was popular on both sides of the Atlantic throughout much of his career, instead his practice focused on portraying insignificant or banal objects of everyday life such as bus tickets, envelopes and wallets. His appraoch was minimalistic and sparse, transforming these everyday objects into pieces of monumental significance.

“ I realise that I am part of an old American tradition of painting the subject. It goes back over a hundred years to Peto, Charles Sheeler, Preston Dickinson, William Harnett….I enjoy painting. It’s as simple as that”. – Charles Brady

As Patrick T. Murphy notes in the foreword to the Royal Hibernian Academy’s catalogue produced to coincide with the gallery’s retrospective of Brady’s work in 2002, Brady’s painting “redeems ordinary objects, re-presenting them to the viewer as if to say ‘here, it is these things that your life is made from’. These modest haikus rarely fail to captivate and almost always penetrate deeply into our appreciation of art and life.”

He was one of the founding members of the Independent Artists and their annual group shows that took place from 1960 onwards. In 1994 Brady was elected as an Honorary member of the Royal Hibernian Academy and he was also a member of Aosdána.

His work has been exhibited widely in both his native America and Ireland, with solo exhibitions in the Urban and Babcock Galleries in New York; Davis Gallery, Dublin; and Grant Fine Arts, Belfast.

The RHA held a major posthumous retrospective of his work in 2002 and his work is included in the public collections of Bank of Ireland, the Ulster Museum, Dublin City Gallery The Hugh Lane, AIB, the Arts Council of Ireland and the Arts Students League, New York. Charles Brady died in 1997.

The Arts Council of Northern Ireland