Cecilia Danell is a Swedish artist based in Galway, Ireland. Her inspiration largely derives from our physical encounter with the landscape and the merging of the outer environment with the inner being, until the boundaries become so blurred that one can act as a substitute for the other. She has an interest in the way we interpret the world around us, and in that which is staged as opposed to authentic, where archetypes, metaphors and the aesthetics of the stage set become important tools in the telling of a story. A sense of otherness pervades her work, which also draws heavily upon her Scandinavian heritage and upbringing and real places come to act as props in a fictional story where she herself appears in one way or another. Much of her work is inspired by Jungian psychology, with special focus on the theory of archetypes and dream interpretation. She also has an ongoing interest in the exploration of duality and the absurd in Existentialist and Surrealist writing as well as the schism between Self and Other and ideas based around copying, ordering and authenticity.

View “Solitude Made Easy” within the Collection 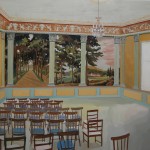 Solitude Made Easy by Cecilia Dannell