Ceadogan is a rug-making company that was set up in 1989 by Denis Kenny. Located in County Wexford, Ceadogan creates high quality woolen rugs based on famous contemporary designs. Denis Kenny originally comes from a farming/fishing background but currently dedicates all of his time to making these magnificent rugs. Ceadogan has become famous for its high quality pieces that incorporate designs from renowned artists such as Mainie Jellett into impressive rugs of wool and silk.

View ‘Mainie Jellett No. 7″ within the Collection 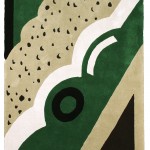 Influence of Cubism and Non-representational Art

The rug housed within the Wexford County Council Art Collection is based on an original gouache drawing by Mainie Jellett, (a renowned Irish painter of the 20th Century). She created many rug designs during the 1920’s and 1930’s in the medium of gouache on paper mounted on card. Mainie Jellett initially painted in the impressionistic style but after studying in Paris under Andre Lhote and Albert Gleizes her work became strongly influenced by Cubism and non-representational art. These influences can be observed within the design of  Mainie Jellett No. 7 (7/35).