Honorary Member of the RHA & RUA

Brian Ferran was born in Derry in 1940 and he became an art teacher and taught for three years. A graduate of the Courtauld Institute in London University and of Brera Academy, Milan, he is former Chief Executive of the Arts Council of Northern Ireland. Since 1963, he has undertaken public and private art commissions and has exhibited regularly in Europe and North America. At the Oireachtas Exhibitions in 1965 an 1976 he won the Douglas Hyde Gold Medal for Irish historical painting. In 1970 he was a Leverhulme Scholar. He is an Honorary Member of the RHA and the RUA and exhibits annually at the exhibitions of both institutions. 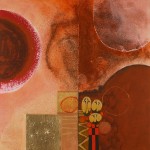 Throughout Ferran’s practice he revisits past themes relating to the ancient history of Ireland in particular Colmcille and An Tain bo Cuailgne (The Cattle RAid of Cooley). This preoccupation with such traditions provides rich imagery of warriors prepared for battle that fit within his richly coloured abstract landscapes. Not only has he the ability to create narratives Ferran is also a true colorist and this is evident throughout Ferran’s work.

“My intention was to illuminate the inferred narrative rather than illustrate it. I sought to surprise myself and to imbue eighteen images with a palpable intensity and a sense of magic. The themes in this exhibtion are inspired by one of Dallan’s descriptions of Colmcille, ie “He was learned in the lore of places.” – Brian Ferran on his body of work The Lore of Places, February 2008

“Brian Ferran is a consummate colourist with a formidable visual intelligence., a clear voice with a distinctive accent and a personal vocabulary…….His work imbues the spirit of powerfully felt symbolism yet subjugated within a framework of painterly gestures, marks and textured surfaces. His long time preoccupation with pattern and texture continues to be manifest in these works.” Dr. Denise Ferran