Working with Light and Shadow

Brian Ballard was born in Belfast in 1943, he studied at the College of Art Belfast 1961- 1964 and at the Liverpool college of art 1964- 1965. Ballard is a contemporary painter of figurative nudes, landscapes and expressionistic still life. His practice has developed into stylistic representations of subjects through the use of rich colours and bold brushstrokes. He often re-presents multiple renditions of the same subject to evoke changes in time and atmosphere.

View “Two Bottles and Daffodils” within the Collection 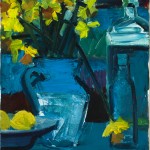 Working with light and shadow, Ballard has developed a pallette with highly evocative pigments midnight blue and aqua marine, laying down thick strokes of paint that bring great depth and expression to his canvases.

“His work is emotional, intuitive and expressive, yet firmly portrays the subject before him. Each canvas possesses a strength of intimacy and immediacy that prompts quiet admiration from the viewer. Every individual painting is a timeless chronicle of found objects, the human figure or the natural world. Captured elements are marshalled into an order chosen by the artist and then crystallised to offer a creative impression of a familiar subject. Brian Ballard’s work is marked by purity of expression and fidelity to nature as he witnesses it.”- Marianne O’Kane

His work can be found in many collections including The Arts Council of Ireland, A.I.B., Crawford Municipal Gallery Cork, The Ulster Museum, The National Trust, Waterford Wedgewood PLC and Irish Rock Legends U2.