Andrew Folan was born in Belfast in 1956 and he attended the Slade School of Fine Art, London, graduating in 1981. His practice is a culmination of print, photography and sculpture and more recently he has combined digital processes and print to create multi-layered photomontages. Folan’s work is primarily conceptual but process always becomes an important factor of his work. Recently he has engaged with concepts of a social, psychological and scientific nature. He is an active collaborator in scientific, medical and architectural projects and participated in the Digital Surface at Tate Britain in 2003. He is currently a Fine Art Print Lecturer at National College of Art and Design, Dublin (NCAD). 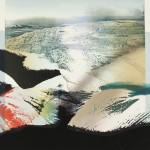 Member of the RHA

He has exhibited widely throughout Europe and is a member of The Royal Hibernian Academy (RHA). His solo exhibition of printed sculptures Arterial Ink toured to a number of venues in Ireland as well as London, Paris and Stockholm (1991-2001). His solo exhibition of digital lambdachromes Stray Light was shown at the Ashford Gallery, Dublin in 2002. He participated in a group exhibition Dead Bodies at the Centre Culturel Irlandais, Paris in 2003. In 2006 he completed a sculptural installation The Fleet Morph at the Mater Hospital Dublin. In 2008 he completed a commission Anatomy of an Instrument for the Royal Victoria Hospital, Belfast, using CT scanning as the central research component. He presented a paper,Grasping the Untouchable at The International Symposium on Electronic Art, Belfast, 2009.

The above information is an edited text from http://www.thecopperhousegallery.com/