View Running Away from a Bunch of Nettles in the Collection 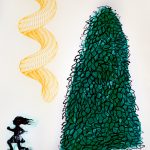 Running Away from a Bunch of Nettles by Alice Maher

The Irish painter and sculptor Alice Maher was born in County Tipperary. After taking a BA in European Studies at the University of Limerick, she studied drawing and painting at the Crawford College of Art in Cork.

Later she received an M.A. in fine arts from the University of Ulster, and then, in 1987, won a Fulbright scholarship to the San Francisco Art Institute. As well as drawing and painting in oils and other media, Maher often creates works with materials like hair and rope, exploring themes of memory and identity.

Alice Maher is a member of a new generation of Irish female artists whose interests include effecting changes in what they consider to be a male-dominated establishment (eg. the Royal Hibernian Academy has traditionally been slow to admit women despite the preponderance of female talent in artist organisations such as the Society of Dublin Painters and the Irish Exhibition of Living Art).

Maher’s art may be somewhat “subversive” but it remains highly personal. It expresses her own doubts, dreams and memories of childhood, rather than dogmatic political views. In her own singular fashion, Maher continues the work of previous female painters like Mary Swanzy, Mainie Jellet and Evie Hone.

Maher has exhibited widely in Ireland, Europe and the United States, and represented Ireland at the 1994 Sao Paulo Bienale.

In 2001, “The History of Tears” was shown at the Purdy Hicks Gallery, London; the Butler Gallery, Kilkenny Castle; and the Green on Red Gallery, Dublin, where she also held one-person exhibitions in 1997 and 1995.