Studied at Kingston College of Art

Rowan Gillespie was born in Dublin in 1953 and moved shortly after to Cyprus, but after the civil war broke out his family moved to York in the North of England. He studied at the York School of Art in 1968 and also in 1970 he studied at the Kingston College of Art in London. It was here that he first met and was inspired by renowned sculptor Henry Moore. Rowan now lives and works in Dublin where he has built his own studio, workshop and foundry.

View “Solstice” within the Collection 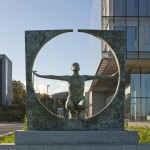 View “In Awe” within the Collection 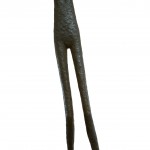 In Awe by Rowan Gillespie

Unique to the Bronze Casting Community

Gillespie  works completely on his own from concept through to the finished 3D Sculpture, this is what sets him apart from most of the bronze casting community; as he has taken the time to painstakingly  learn all of the processes involved from moulding and casting to finishing. Being influenced by the sculptor Henry Moore and the painter Edvard Munch, Gillespie creates physical narratives that reflect on aspects of the human condition. He uses the lost wax casting process to create his pieces and has worked almost exclusively on site-specific art since 1996.

“ …to be one man alone in a workshop with nothing more than the notion of an idea, then to start bending and welding, covering in clay and wax, changing, forming, deforming, reforming, discovering something, loving it and hating it, days and weeks of journeying, Then the moulding, baking, melting, lifting and shoveling, sweating, exhaustion and exhilaration until almost abruptly, one day, there is something….”- Rowan Gillespie