Born in Limerick, Robert Ryan graduated from Limerick School of Art and Design in 1987. He worked in Copenhagen and London before returning to Ireland in 1994.

View ‘Death of a Leader’ within the Collection 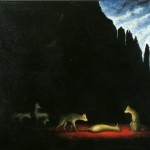 Death of a Leader by Robert Ryan

View ‘Mother and Young’ within the Collection 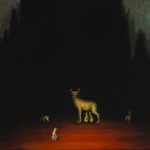 Mother and Young by Robert Ryan

The Commonality Between Man and Other Creatures

Allegorical concepts such as the infinity of space and time, solitude, vulnerability, fragility and the cycle of life are explored in his paintings and drawings in which a generic four-legged creature is central. This creature inhabits another world, a universal landscape. Ryan has cultivated his images of both place and it’s inhabitants into a hybrid, a non-specific and as a result the viewer is left to reflect on essential truths. This is work that ultimately celebrates the commonality between man and all other creatures past, present and future.

An interest in zoology and travel has hugely informed Ryan’s work. He has traveled widely, visiting over sixty countries on all continents where he has encountered many different eco-systems, experiencing first hand how all living things interact, how they respond to their environment, how man responds to other evolutionary groups and how we value that fact. This knowledge forms a major part of the concepts for his work.

Robert Ryan lives and works in Lough Gur, Co. Limerick, Ireland. Lough Gur is a small placid lake, surrounded by rugged limestone hills and deciduous woodland. It has been continuously inhabited since the arrival of neolithic people five thousand years ago. It is a place of outstanding archaeological significance. Ruins and artifacts from many periods of Irish history have been found here. The evocative qualities of this environment have been a constant source of inspiration for his work.