View ‘Coloured Lace’ within the Collection 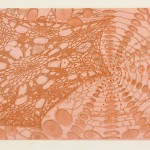 “I’ve always done prints and drawings, always. No one buys those installations, so when you see things that are portable that I’m not attached to, they’re probably two-dimensional. If you get an installation of mine, you inherit [my assistant] Ryan, myself, a crew, the dog, the noise, the dirt. We wreck the house. So if you don’t want that, then you get prints and drawings.” – Judy Pfaff

Her installations have been referred to as a type of three dimensional collage by critic Roberta Smith and also Bejnamin Genocchio of the New York times states:

“Although these works look random, when you begin to get into them it is remarkable how all the elements seem to hang together and develop on one another. She seems somehow to get order and disorder working for her at the same time. It is a very contemporary quality, given our lives today.”