Louis Le Brocquy was an Irish painter born in Dublin in 1916 and his career spanned some seventy years until his death in 2012. Le Brocquy was a self-taught painter who studied the works of the Old Masters such as Velázquez and Goya and his earlier works prove his artistic ability to paint in the academic tradition of these Old Masters. From 1939 Le Brocquy’s practice shifted towards a more deeper, psychological exploration of the human condition. By utilising the human figure itself, isolating it and abstracting it, he conveyed themes of human isolation within contemporary society.

View ‘Human Image’ within the Collection 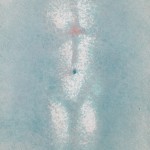 One of the Most Prominent Painters in Irish Modern Art

Le Brocquy is widely acclaimed as one of the most prominent painters in Irish modern art, achieving critical acclaim for his unique approach to portraiture, focusing solely on the head he re-imagined the possibilities and overcame limitations of the genre. Within these portraits Le Brocquy wished to capture not only the person’s physical presence but also their spiritual complexity and shared past.

“Enter that box, enter behind the billowing curtain of the face and you have the whole landscape of the spirit”.

His work received many accolades in his career and in 1956, he represented Ireland at the Venice Biennale. The artist’s work is represented in numerous public collections from the Guggenheim, New York to the Tate Modern, London. In Ireland, he is the first and only living painter to be included during his lifetime in the Permanent Irish Collection of the National Gallery of Ireland.