Duality Of Existence In Shape And Form

Struan Hamilton is a printmaker born in Scotland in 1971. His work draws inspiration from the organic happenings within the man made environment of a modern city. This duality of existence in shapes and forms creates a dynamic dialogue that generates a multitude of visual experience for the viewer. Working predominantly in intaglio and more specifically in viscosity etching, he has the ability to push the surface of an etching plate, and be pushed back in turn by it. This conflictual process generates a dynamism inherent throughout his work.

View “TGV” within the Collection 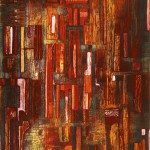 “From October 1994 to July 1998 I extended my printmaking experience at the Atelier Contrepoint in Paris, France. The Atelier has a world-wide reputation since its original founding by S.W Hayter. During my time there I studied and developed my skills in the technique of simultaneous colour printing (viscosity) and the use of classical burin in modern engraving and etching. I was soon invited to work as printmaking assistant to Hector Saunier, the Atelier’s director, and its head technician, Sun Sun Yip. My responsibilities included the preparation of all work surfaces, mixing of viscosity and intaglio inks, roller and press maintenance and exhibition arrangements.

On returning to Scotland I was employed at the newly built Dundee Contemporary Arts Centre to assist in the set up of their printmaking facilities, this gave me valuable knowledge in the use of space and layout of open access workshops. After Dundee I was the manager of Belfast Print Workshop. I am presently the 2D Team Leader for Elam School of Fine Arts, University of Auckland, having taken up this position in July 2009. My responsibilities here include the teaching of Fine Art Printmaking to 1st years through to PHD candidates.”- Struan Hamilton