The following were the only biographical details of the artist and his work available.

John Gerard Kehoe was born in Dublin in 1948 of Wexford parent.s His father John Joseph Kehoe was born at Tincurry, Ferns. His mother Ann Kehoe, a native of Scarawalsh, was the Post Mistress of Oylegate until 1988. A self-taught painter, his famous painting, Vinegar Hill, 1798, was inspired by Nicholas Furlaong. He publisehd a book of plays written by himself from 1981-85 in 1993. The title of the book is ‘Plays’ by John Kehoe. Two of his one act plays THe Interview and Guns for a Witness were performed by Michael Way and the Riff Raff Theatre Company in Wexford. Another play Lemon Moon has been read at the National Theatre and received favourable comment.

Edited extract from Bernard Browne, Living by the Pen: a biographical dictionary of County Wexford authors, published by the author, 1997

View ‘Pikemen of Vinegar Hill’ within the Collection 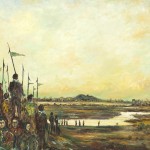